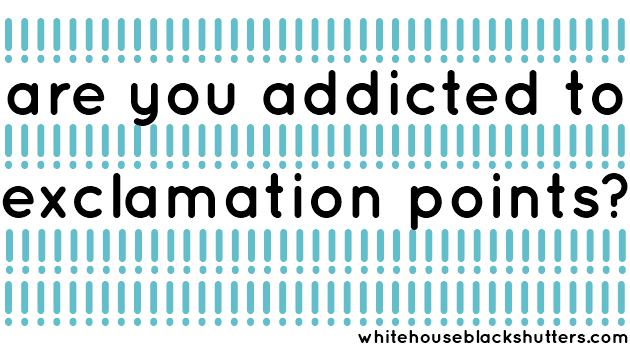 Oh you didn’t get the memo? !!! means I’m really excited or something is urgent, ! means I’m angry or being a b, and a . means I’m reading it in a voice that resembles that of Ben Stein. Anyone? Anyone?

I don’t know when it happened, but I’ve become dependent on the exclamation point. My texts have gone from reading “You should come with us on Sunday.” to “You should come with us on Sunday!!!” I have to edit the crap out of whatever I type so I don’t sound like a hyperactive squirrel freaking out at each sentence that I encounter. NUTS! TREE! WORDS AND SENTENCES! GAH!!!!

I recently found another person who abused the exclamatory sentence as much as I did and it was only then that I realized I had a problem. I think it’s safe to say you have a problem if:

-every sentence ends with an exclamation point
-you’re not as excited as it seems, the topic is not something to get excited about (i.e. the DMV)
-you’re exhausted reading back what you had said
-anything with a period now is said in a boring voice

Not exhausted? Trying reading back your typing as if you were yelling each sentence excitedly. Then try reading some periods. It’s weird.  It’s weird!

We went to the doctor’s office today! haha it went okay, I was pretty happy about the results! 😉 He said that I have some rare flu!! CAN YOU BELIEVE THAT!?

read that and then read this

We went to the doctor’s office today. It went okay. I was pretty happy about the results. He said that I have some rare flu. Can you believe that?

Whew! Tired from yelling so much, and then bored out of my mind. I think if you picture exclamation points as “LOUD NOISES!” then maybe you won’t use them as much?

I still use them here or there, but I try and restrain myself slightly. It still feels weird, and I still picture myself in a Ben Stein voice, but I am getting better. Sometimes I’ll end it with a smiley face, sometimes no punctuation. Oh smiley faces and lol’s and haha’s. I don’t ever think I could quit you.

So let’s get it out. What punctuation or terms do you overuse online?

Are you trying to fix it? Do you even care?

special thanks to Craft Snark for inspiring this post.
!!!!!!! 🙂