Although I don’t think our basement is scary or creepy, others (like you) might beg to differ.

Compared to your new construction home’s basement, unfinished or not, our basement isn’t quite as pretty. But during our house hunt, we saw some pre-tty scaaary basements and crawlspaces. Tons of houses that were great until we went down there. Mushrooms growing on walls, black mold, high flood lines, dirt floors and walls, and stairways that led to no where. I’ll never forget the beautiful 5 bedroom 1920s house in the historic area of town. It was perfect, until we went down there and saw the beams that supported the house rotting away. Or the house we were thisclose to buying and then found standing water in the crawlspace that would need a minimum of $12,000 in repairs.

When we first took a look at our house, I was soooo nervous to go down there. But we were surprised to find a dry, mold free, decently clean basement. It wasn’t pretty, but it was a basement that could be used. Here’s what we saw: 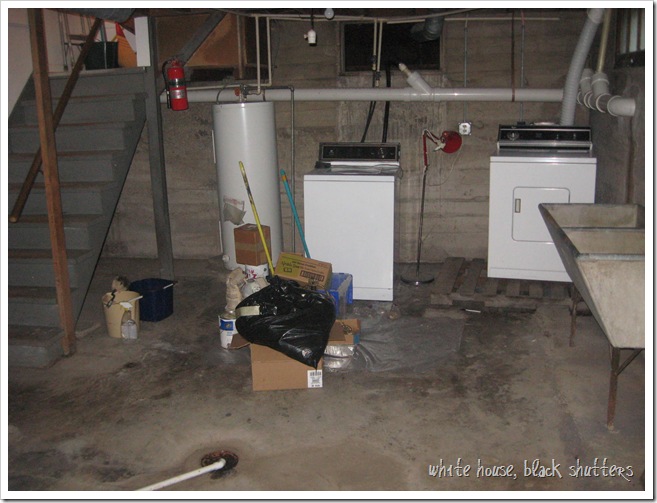 Here’s what it looked like about a month ago: 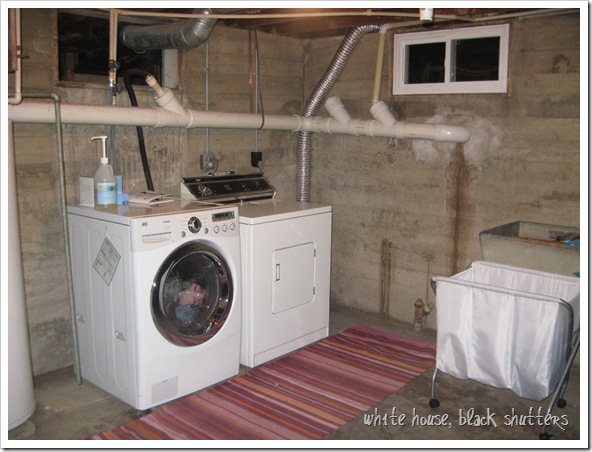 We scored on a new LG washer from Home Depot - originally $1000, it was a floor model for a year, then went down to $200 and we adopted it. It’s great. Doesn’t beat up our clothes, very energy efficient, and it sings a cute song when done! Not that that’s important...

The IKEA rug was bought 2 years ago for under $15 and previously on the balcony at our old apartment. I found it sitting unused in the garage. 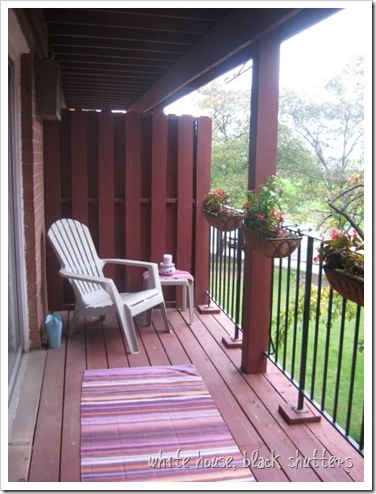 I added a lamp, an old drafting table, and cleaned up my detergent and here’s what that space looks like now: 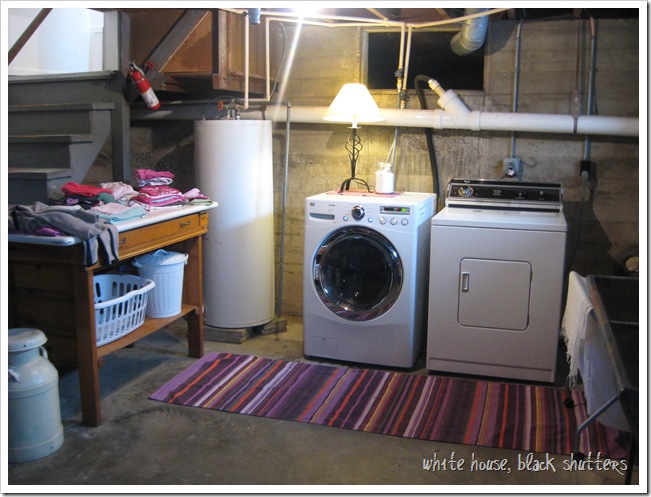 The lamp had no place and was in our garage sale pile, the placemat was bought at IKEA with the rug for under $2, and the glass jar was .99 at Goodwill. 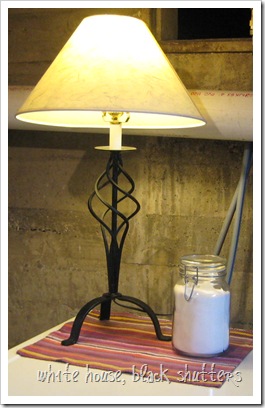 We don’t live in an apartment anymore, but we’ve put our dorm-room-style sorter to good use. Keeping it down here allows us to bring down clothes as they pile up and have them sorted and ready to wash. We don’t have a hanging rack just yet, but this works for now. 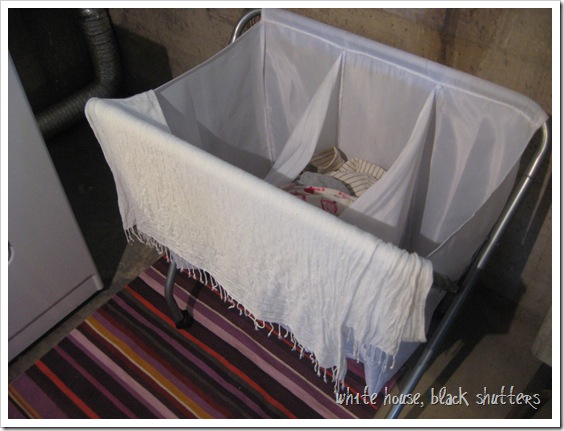 We found the drafting table at Goodwill and added a scrap piece of Corian to create a larger top for folding laundry.

The bottom neatly stores a laundry basket, garbage can, extra detergent and supplies. 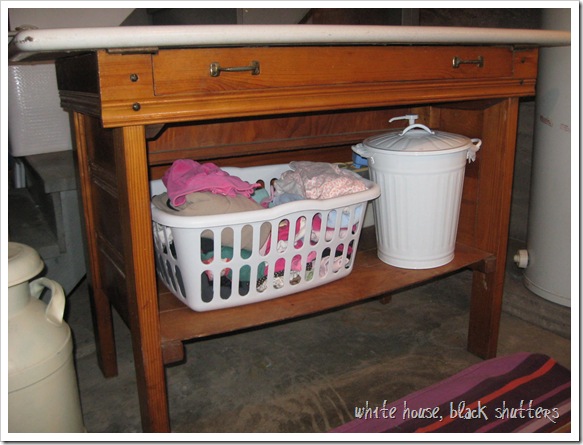 and the narrow drawer stores the ugly washer manuals that normally hang from the sides. 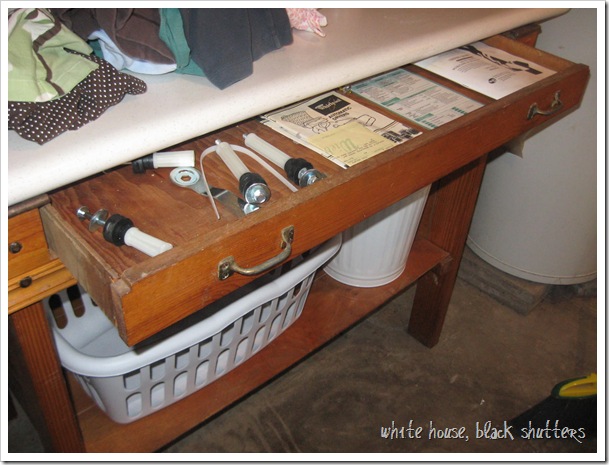 My boxes of detergent, borax, and brightener had previously been sitting on the washer. Every load I would take a half scoop of each and end up with a bunch spilled wasted. Like the shot glass I was using for a scoop? 😉 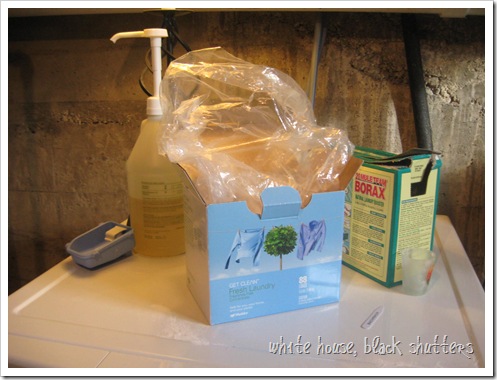 I took some measuring cups and put equal parts of the detergent and borax into a Tupperware cereal box, with small scoops of brightener here and there. Stirred it up, poured it into my pretty glass jar, and added a scoop. Stored the glass jar within reach and the extras back where no one can see them, so much cleaner! 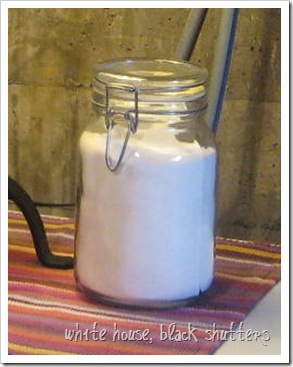 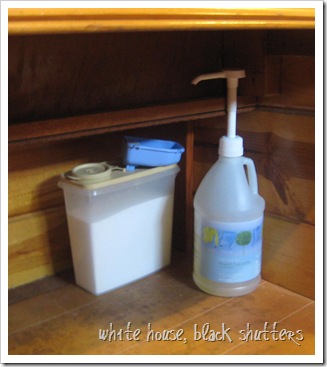 Future projects for this space are to hang drying racks and poles, drylok the walls so that they’re sealed and painted white and finish the floors off with a basement/garage paint. 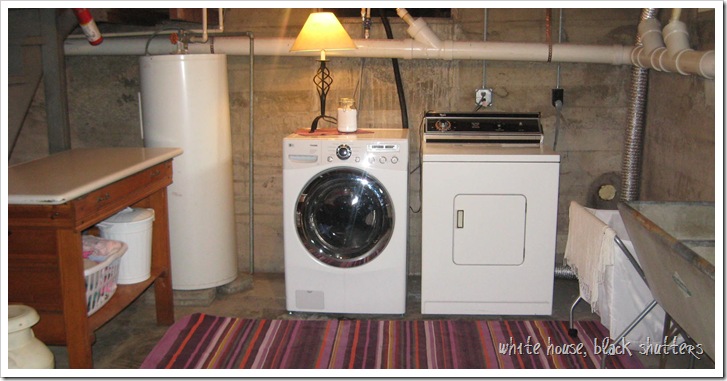 Our basement is still ugly, hoses and pipes are exposed, but these little changes have made doing laundry a bit brighter!