I am love with flowers and firmly believe that when it comes to your wedding, you should not overlook them. But instead of insisting on roses and other expensive flowers, mix it up, and don’t be afraid to use garden clippings, or even weeds and dirt in your centerpieces!

You’ll be surprised at the look you create and even more surprised when it costs you next to nothing. Think I’m crazy? Keep reading, and I’ll show you. 🙂 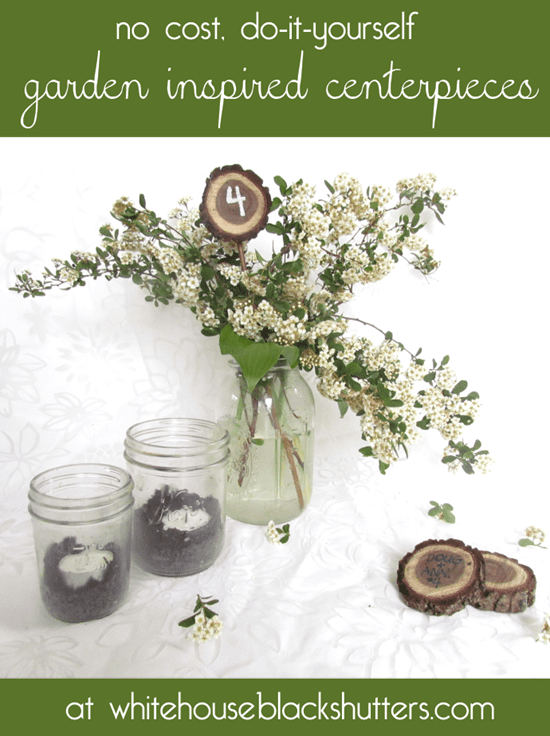 The flowers for this piece were cut-offs of a flowering bush in our backyard! The greenery are hosta leaves. I made a bunch in my hands, broke off branches, and moved em around, and stuck em into a mason jar full of water when I was happy. DONE! 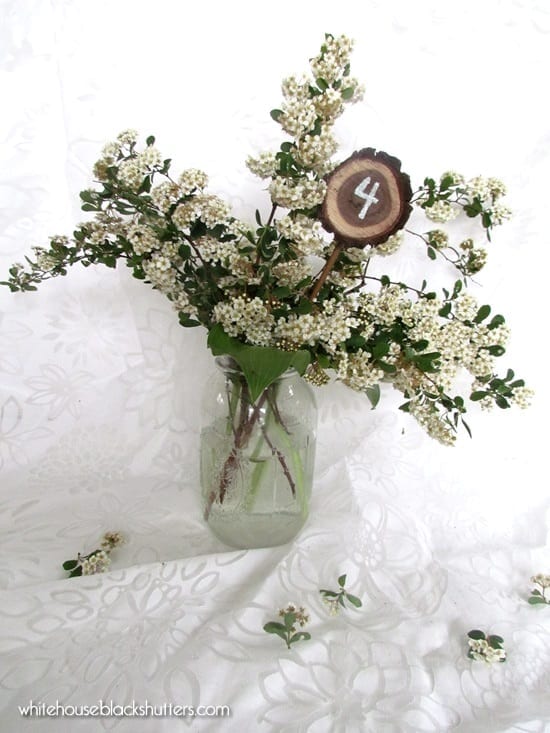 Making the table number was also free and easy! Using a chainsaw, cut slices of a fallen branch from your yard (this is from a black walnut tree). Paint a pick brown, paint a number onto the slice of branch, and hot glue the slice to the pick. I added clear glass glitter for added interest. 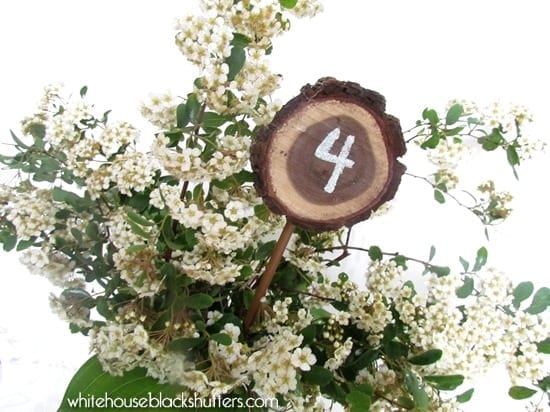 In addition to table numbers, you could use the branch slices to make place cards for your guests! I used a Sharpie, but you could take a wood-burning tool, or engraver to make it look like your guests’ names have been lovingly carved into a tree. 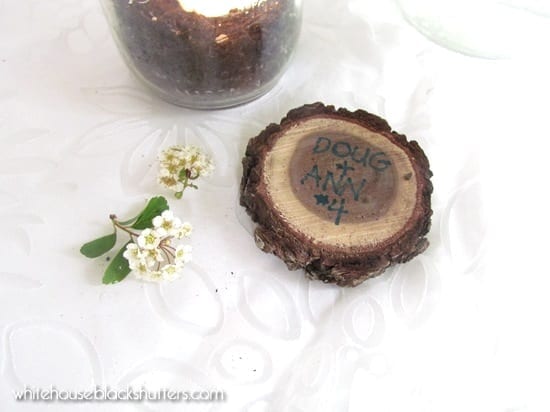 I scooped a little bit of dirt (free from the backyard), into mason jars of varying sizes, and stuck in a tealight. Maybe you don’t think dirt is all too pretty, but it has a beautiful dark color and gives great contrast to an otherwise white table. And don’t you love the idea of it? Everything in weddings is clean and white, throw in some dirt and make it interesting! 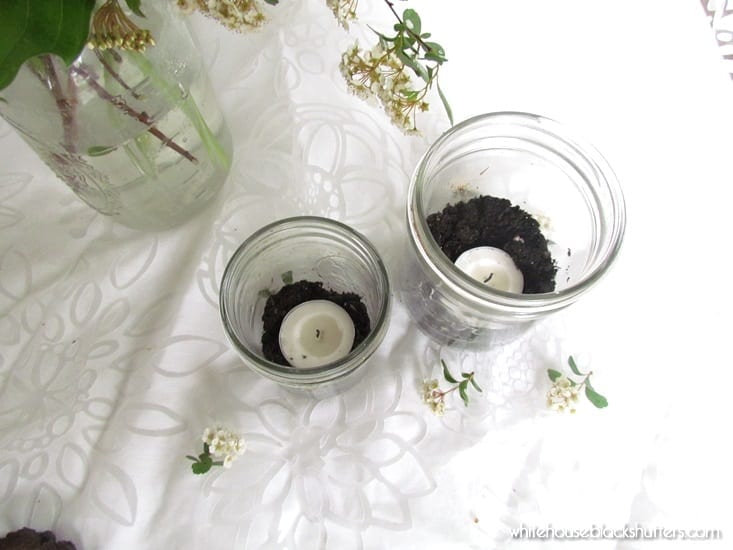 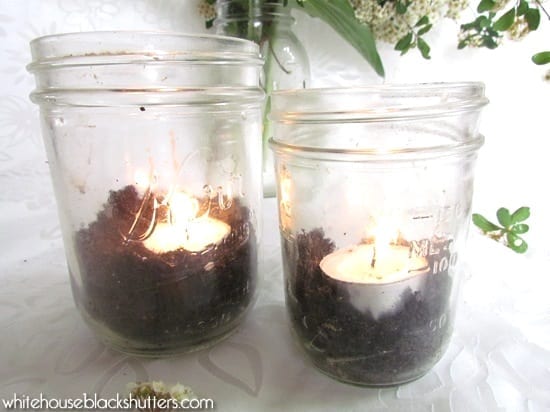 Start scouring garage sales and craigslist, you can often get mason jars for next to nothing. I bought a box of about 20 jars for $3, and saw another huge box last weekend for only a dollar! 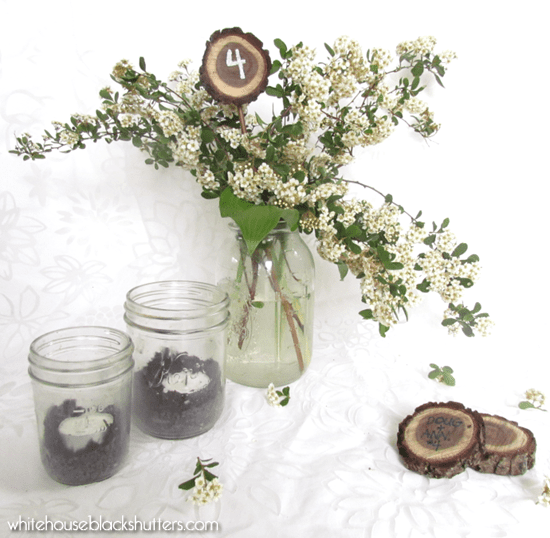 While you’re at it, go ahead and tie in common garden flowers and even weeds (yes, weeds) into your bouquets. WHAT?! Yep. In fact, I did just that in our bouquets! Before you think I’m crazy, let me show you.

I used to work at a florist, and I had a very specific idea of what I wanted. In fact, the florist making our flowers thought I was nuts when I suggested using these flowers in my wedding bouquets!

Look closely and you’ll see queen anne’s lace (a weed), green mums (this kind are called “kermits”), grassy looking accents, along with the more wedding-ish roses and gerbera daisies. Instead of using large, regular sized roses, I had them use smaller ones, which have lots of blooms per stem. 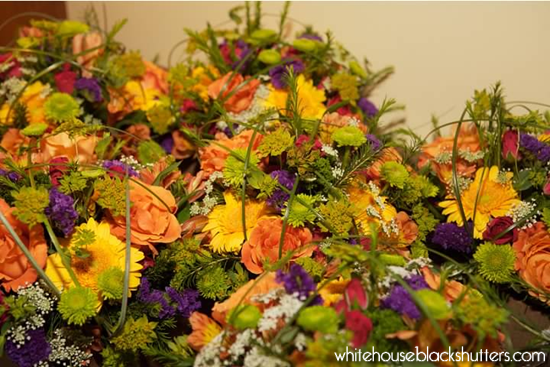 Some people shun the more “common” flowers and want nothing but roses and lilies in their bouquet. NOPE, not me! I wanted the mums and the weeds, and all that other stuff in mine too. Again, the florist thought I was nuts, but she was gushing once they were done. 😉 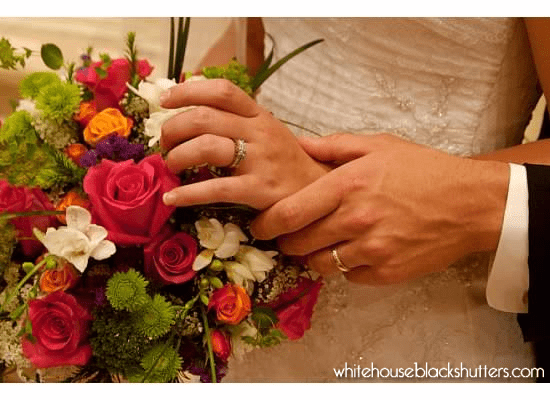 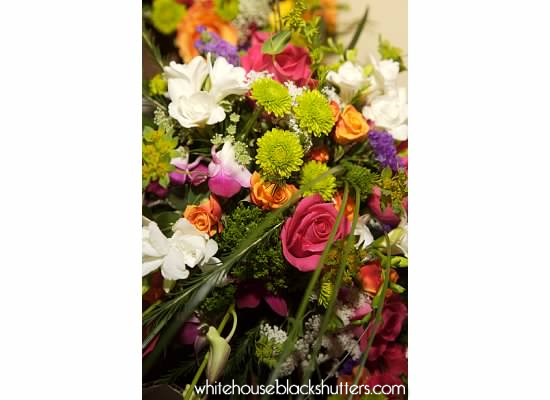 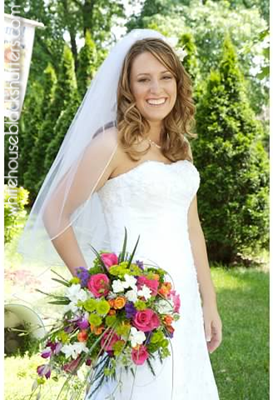 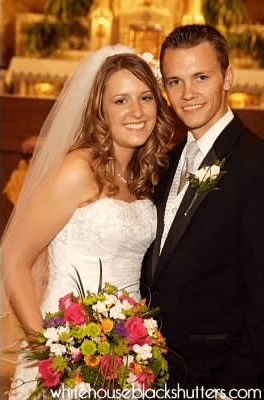 So instead of thinking only of roses and other EXPENSIVE flowers, go in your backyard, trim your bushes(or bug a neighbor), and create something that makes a big statement, for almost no money at all! 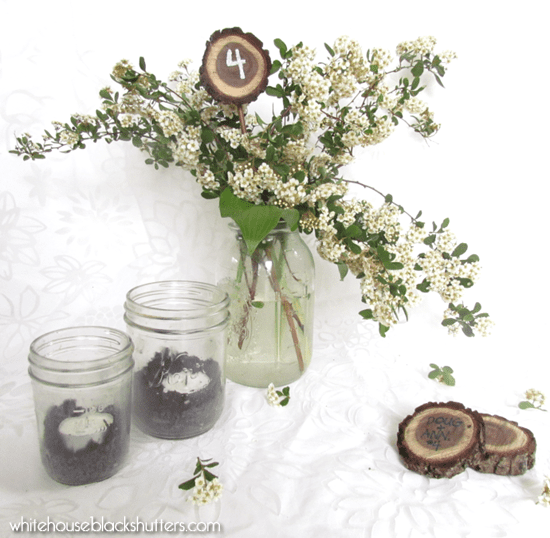