So a while back I showed you the painted trim in our living room. This unused living room later became my sweet mom cave. I also painted the dark trim in our dining room, and the before and after on that is awesome because it is the same furniture! Really shows the magic of the transformation.

But we ALSO painted the trim in our hallway. I still have a  few things to do before it is finished, but that is stopping me from showing you an amazing before and after. Here is what it looks like today: 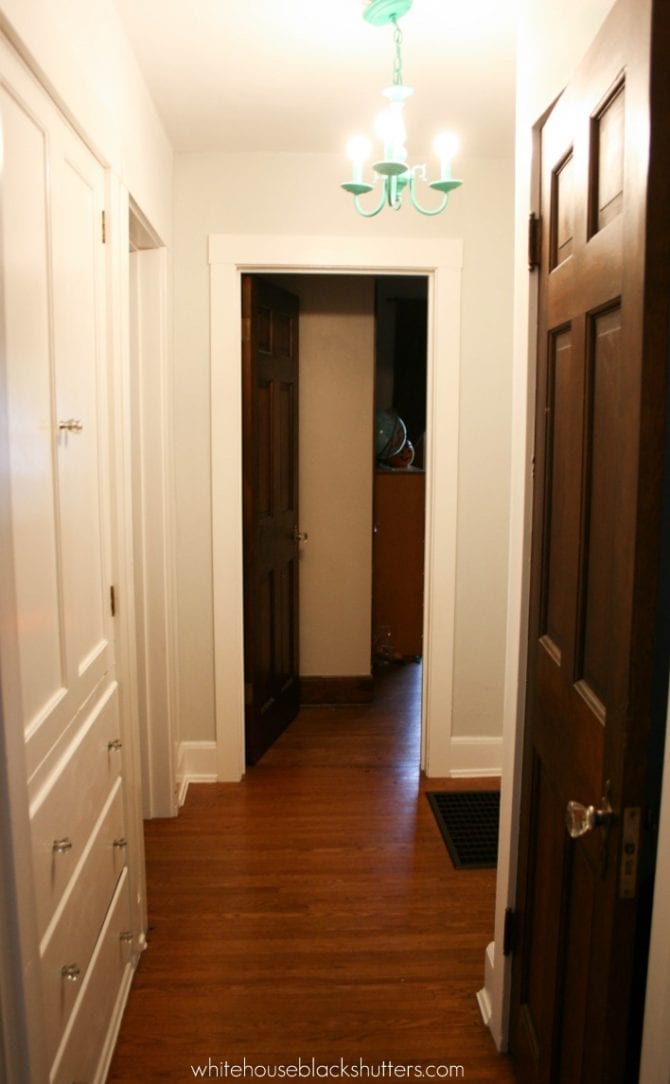 The wall straight ahead is the only one that's been painted, and it only has one coat. I used Martha Stewart's "Heavy Goose" (at Home Depot), a very light cool gray. The rest of the walls are primed only, but were previously a peeling gross peachy beige color. I would still like to add a runner on the floor (maybe a black and white striped rug?), change the light fixture (the attic door hits it), add an instagram wall of pictures, and oh yeah finish painting.

But blah blah blah! This house will be never finished. And this space might not be finished until we decide to sell the house. So sit back and enjoy this awesome before and after:

It's so light and clean! That is the biggest difference. Our hallway actually looks and feels clean. As I mentioned in other posts, painting the trim was a tough decision to make since it would be such a big job and I almost felt like I was committing a sin painting over wood. But the trim was pretty beat up and since our house is small, it made the rooms look small and dark. We left the doors wood because they are old and I thought they'd stick if we did.

If you're wanting to paint the trim in your house, know that it's a huge pain to do it. My hand was actually swollen and wanted to fall off. I wanted to throw in the towel. But six months later, I'm SO glad we did it and you will be too. Everything feels so much cleaner now, which is a bonus because with four kids, our house is rarely clean. Magical optical illusion trim, I tell ya. 😉

What do you think?